The Super Glue strain, also known as Tacky Glue by some, is a hybrid that leans slightly on the indica side. It has a smell that can be described as piney and caramel-like. The strain was originally created by cross breeding Afghani and Northern Light strains of cannabis.

As for the plant itself, expect a tall, slender plant smothered in white trichomes once it has matured. Super Glue’s distinct blend of smells and flavors makes for a unique experience that can’t be captured by any other strain.

Super Glue is a THC heavy strain, favoring THC specifically over other cannabinoids. The plant can contain upwards to 25% THC and usually around 1% CBD. The taste of this strain can be overwhelming for some; however, many users specifically look for the earthy taste that Super Glue offers. The taste itself can be described as a mixture of traditional cannabis and light citrusy undertones. There’s no going wrong with Super Glue if you are a fan of the piney taste associated with cannabis. 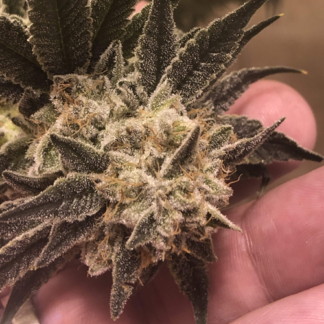